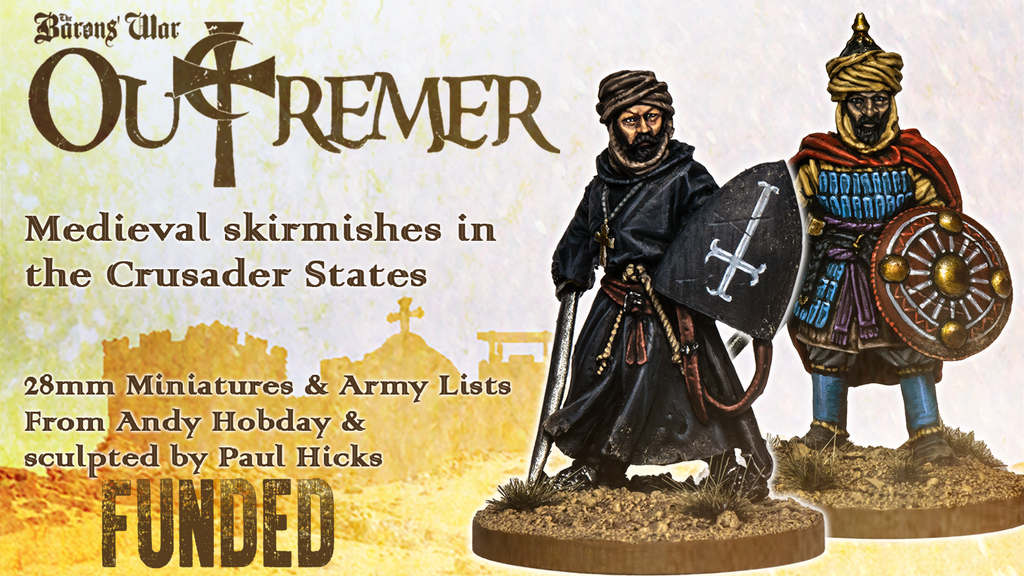 Latest Updates from Our Project:

We have added three new pledge levels to the campaign called *All the Outremer Figures*, *All the Muslim Warriors* and *All the Franks*. You can swap to any of these by clicking on the 'Change Your Pledge' button.


ALL THE OUTREMER FIGURES

When we revealed the last few stretch goals of the campaign we received lots of requests to set up a pledge level which, if backed, results in you receiving all the figures from the campaign.  For those who asked you will be pleased to know the new pledge looks like this...

We'll incude this as a single add-on product in the pledge manager for those of you who have backed a terrain pledge and want to easily add all the figures.

The eagle eyed among you will probably have spotted these chaps with their holy relic?

Mr Hicks has included the 'Holy Relic' pack as a huge thank you to all who back us at this pledge level - which is for one of every miniature he has sculpted for Outremer. We believe there are 99 figures in total!


ALL THE MUSLIM WARRIORS

Love the Muslim Warriors from the Outremer campaign, and want one of each of these figure in white metal?  Well we now have a pledge level just for you!

Wanting just the Franks from the Outremer campaign, and would like one of each figure in white metal?  They now have their own pledge level too...

Please note: Changing your pledge will not affect you receiving the 24-hour exclusive figure as this is based on your backer number.


If anyone has any questions about the new pledge levels, or anything else at all please do not hesitate to contact us below in the comments or via a message.

Have a great start to the week everyone and stay safe. 😃

Following on from a positive response to our last update, we have decided to create a final pledge level for a further (and final) 25 physical Fortified Hospitals.


With four days left to go, a new pledge level will go live on Saturday the 28th of May at 11:00 (UK time). This new batch of forts will be made available on a first come first served basis.


The Fortified Hospital (physical terrain) 3 will have an estimated delivery date of September 2023. Backing at this pledge level will NOT delay anything else from your pledge being sent to you as, when ready, the fort will be shipped separately.

You must swap to the Fortified Hospital (physical terrain) 3 pledge if you plan to back a physical fortified hospital. If you wish to include miniatures, total up the combined value and add that amount to your pledge. You will be instructed on how to add extra figure packs inside the pledge manager when it opens in June.

Alternatively, don't forget, if you have a printer or know someone who can print it for you, you also have the option of adding the STL files to your pledge.

Last night Mr Hicks finished the second pack of Muslim medium cavalry, and once this update has been sent, we'll add them to all the relevant graphics replacing their white placeholder.

My plan is to join these two chaps with the Veteran Sergeants on horse to create a local group of mounted warriors serving a Frankish lord, helping to characterise my local retinue.

As we head into the final weekend, Outremer currently holds the title of the most successful campaign we have run to date. Going into the final Sunday, if the project continues to hold its total above £82k we will look to add something new to celebrate and share in its success.

Have a great weekend everyone and stay safe. 😃

Over the last week, we have been asked several times if there is any possibility of offering more physical Fortified Hospitals. Having looked at our production schedule, we believe we can offer another run of 25 if there is sufficient interest.

There is a caveat to this, however. As you can imagine, a piece of this size is not a quick print, so to give enough time for production, the shipping date for this final run would be September 2023. Offering an extra 25 Fortified Hospitals would delay the general release date until early 2024.

To be clear, at this point, we are not confirming another 25 will soon become available. We are initially trying to gauge interest and make sure it is something you, our supporters, want. If you are interested, please comment below and let us know, and we will take it from there.

Thanks for all your support so far,

With the Kickstarter going off like a rocket, it might surprise you to know we are halfway through the campaign on day 10, with another ten days to go.

Since our recent update where we revealed all the remaining stretch goals, we have successfully unlocked the third pack of Turcopoles, and we are closing in fast on the Assassins and Flame Throwers.

If you want to add any of the Stretch Goals to your pledge, pop in and amend your pledge amount by the value of the pack(s) you'd like. Increasing your pledge helps us unlock further stretch goals.

Once again, we have been privileged to call on the maestro Peter Dennis to create the artwork for the Outremer supplement. With unlocking the stretch goal for a free printed copy, we thought you might want to see the whole piece as we envisage another wrap-around cover for the final book.

Inside the book, there will be retinue lists for the following, alongside new traits and abilities:

• Christian Military Orders - will cover Templars, Knights of St John, Knights of Lazarus and others. These will be disciplined and elite warriors.

• Settled Franks - a mix of western and eastern Christians, as well as local Muslims too. Initially predominantly French but over time intermarrying as they settle. Local troops will be included, such as Turcopoles.

• Crusading Franks - closest to current The Barons' War retinues. A nobleman and his retinue visiting Outremer from any European country. On a personal visit or as part of an expedition to the Holy Land.

• Pilgrims - western and eastern travellers on a pilgrimage to the holy sites. It could contain a lesser knight and their bodyguards, a priest carrying sacred relics to be blessed, and, if lucky, a bodyguard of Knights from one of the holy orders.

• Localised Muslims - led by capable commanders, the successors to Saladin and Nur ad-Din, these retinues have a wide selection of troop types, both infantry and cavalry, to represent the complexities of the Muslim realms.

• Bandits/Marauders - plenty of choice for a retinue as they make a perfect 'refuge for the wicked'. A Marauder retinue could also be led by a local knight attacking Muslim caravans just because they can...

There will be new rules such as exhaustion caused by skirmishing in the harsh environment of the Middle East, as well as new terrain rules for fighting in the region. We'll share a complete contents list later down the line, and as always, until printed, everything is subject to change.

We have received several requests for an "All-in deal" pledge level, which is easy to do once the stretch goals are unlocked. However, we think we have a chicken and egg situation where we won't unlock all the stretch goals until we offer an all-in option. Therefore this weekend, we will create the all-in pledge and put it live. Also requested are an "all Muslim deal" and an "all Frank deal". When all three are available, you can freely switch.


Finally, can we ask you to share the Outremer Kickstarter with any friends who could be interested - this helps and is very appreciated.

Have a great weekend everyone and stay safe. 😃